As a newbie in the realm of CBD weed, it can be challenging to pick high-quality flowers. Is it possible to tease out excellent weed from a mediocre flower just by looking at it? It’s not an exact science. You’ll never be able to tell a bud’s potency without smoking it, but here are four pointers that may help. 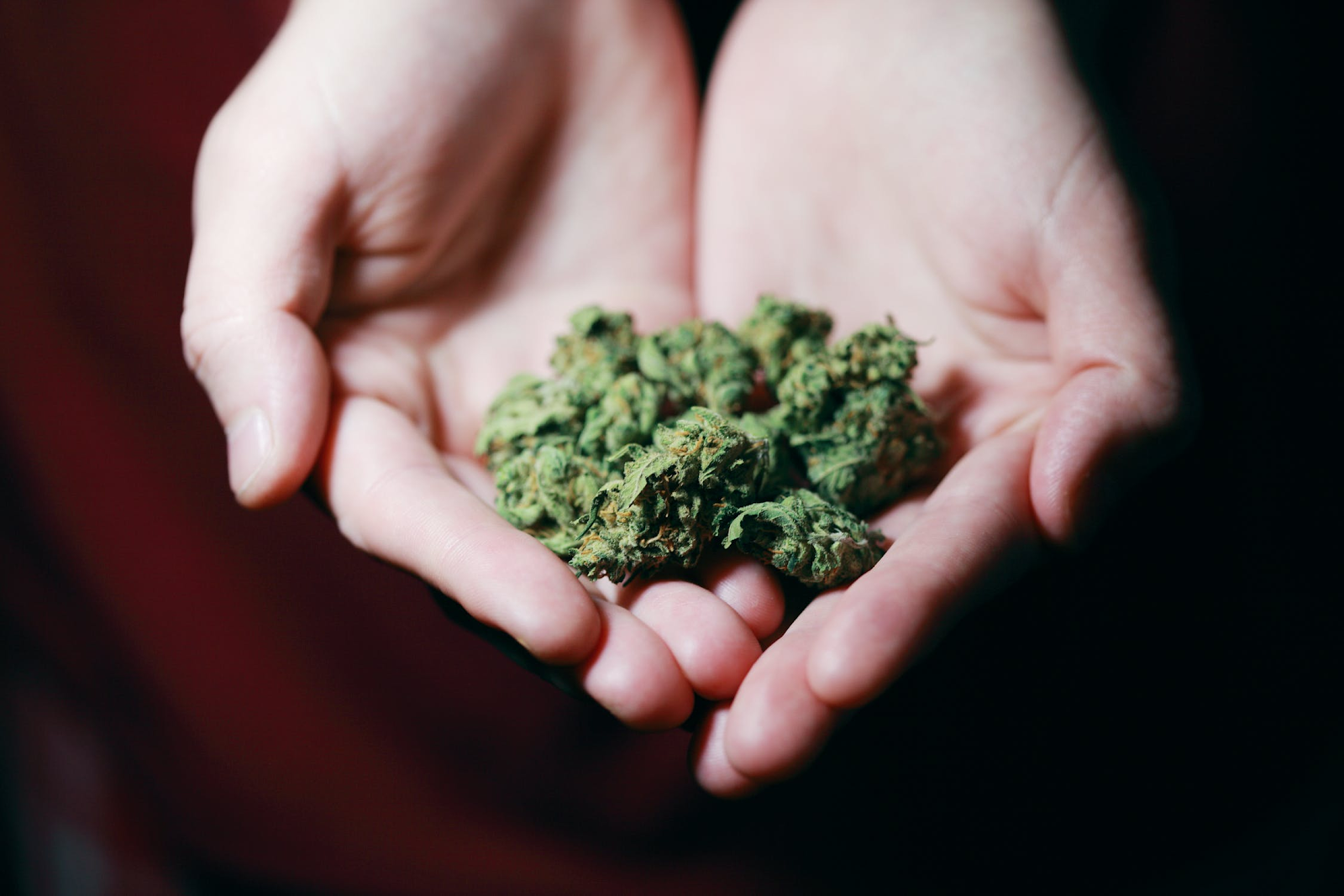 As you walk into a weed retailer, a unique scent of weed often blasts your nostrils – Sometimes a pungent smell with citrusy, floral or even cheesy undertones. These are terpenes, or ‘terps’, about a hundred organic compounds produced by the glands of the cannabis plant (trichomes).

Each weed strain has a characteristic terpene cocktail that gives it a range of different aromas. Some strains, for instance –  Lemon Haze, Sour Diesel, and Lemon Skunk – have a lot of limonene, a terp that gives them a sour tang. Limonene is also found in peppermint, fruit rinds or rosemary.

A rule of thumb to follow is to pick the stinkiest weed you find. It’s like good cheese – The more pungent the smell, the better!

Do try to avoid flowers that smell like hay, because that usually means that they’re too humid – which can make them go bad faster.

Another tip to spot high-quality buds is to make sure that they’re not too dry either. A bud that’s not too dry nor too humid is bound to last longer in your stash.

Usually, a flower that’s too dry is less potent, crunchy and sticky. One way to find out if a plant is dry is to look out for trichomes.

Trichomes are the factories that manufacture all that therapeutic goodness in cannabis – mainly cannabinoids, but also terpenes as well as other chemicals.

When trichomes get to work, they produce tiny crystals of resin that cover the buds of cannabis plants.

A bud with a sticky, thick and rich trichome coat is the cream of the crop of buds – It indicates that a flower holds those therapeutic compounds in its resin.

Trichomes are so highly valued that in some cases, crystalized sugar is sprayed on weed to make fake trichomes – A strategy that has been used to make weed more appealing, according to some weed coffeeshops in Holland.

But plants with juicy trichomes don’t necessarily have more cannabinoids or terpenes than plants with fewer trichomes. And weed that’s neither sticky nor humid can still have beneficial effects.

Flowers that are too dry, too humid or scentless can be therapeutic, but they may result in a harsher or less flavorful smoke.

Related   The Beginner's Guide to CBD 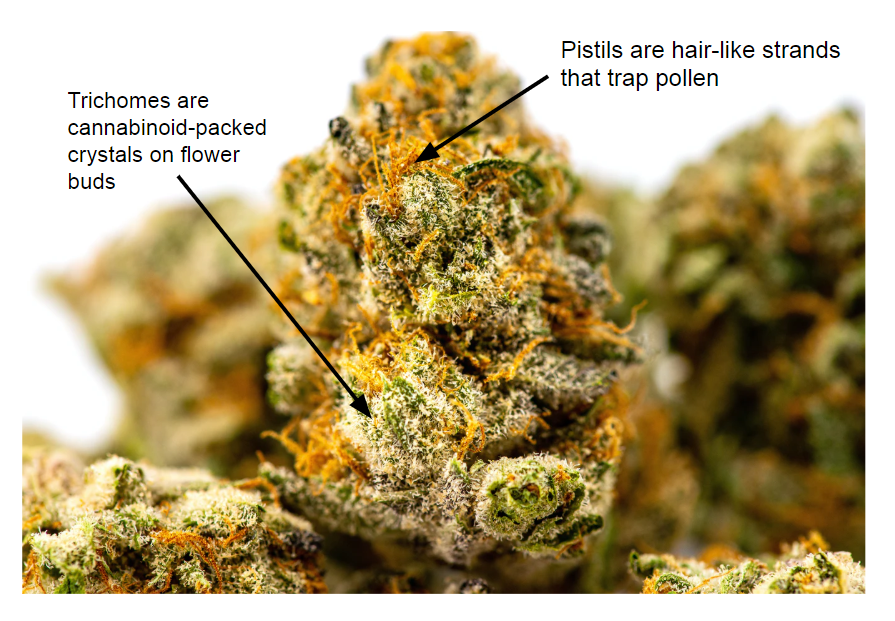 Pistils are long, hair-like strands on cannabis flowers that are coated with sticky resin, just like trichomes.

Pistils come in a range of different colours – purple, golden, orange, red or green – and are often referred to as ‘cannabis vaginas’, as they form the female reproductive part of the plant that traps pollen.

Although the length of pistils can depend on a plant’s strain and maturity, it can also help determine whether a plant is healthy.

Generally, a mature and healthy plant has a lot of brown pistils on its buds – And its trichomes are cloudy or even brown.

A compact flower may indicate that it’s healthier and that it was well-nurtured through practices like pruning.

Pruning is a common practice used by growers that removes unwanted foliage or canopy so that a plant can focus all its energy on producing big and dense nuggets (or ‘nugs’). It’s a bit like focusing on one muscle at the gym to maximize progress in that one muscle instead of total body conditioning.

But again, some strains can’t produce dense flowers, though they may have therapeutic effects.

The most important aspects to consider when choosing a flower to smoke are fragrance and trichomes, although pistils and bud density may be relevant.

Keep in mind that there are pitfalls when inspecting a flower. Consuming the bud is the only way to find out whether it’s any good. 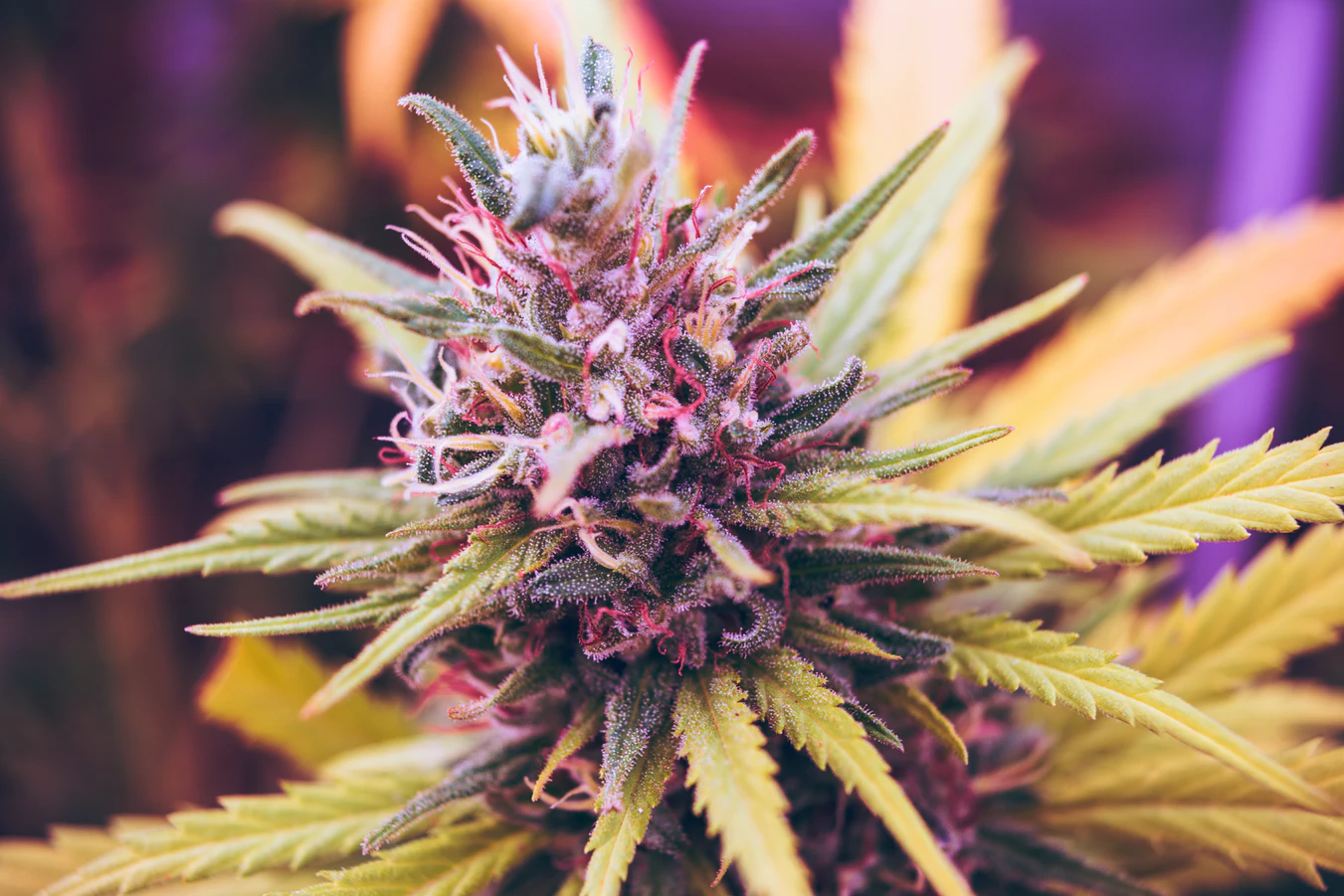 Fun Fact Of the 200 compounds or so in cannabis, there’s another group apart from terpenes that may affect the smell of weed. These are called flavonoids, which color cannabis strains red, blue or even deep purple. Flavonoids may also affect the scent of weed by interacting with terpenes, according to scientists, but this synergy is still poorly understood.

Here’s Another Fun Fact The pungent smell of terpenes in trichomes attracts pollinators, while deterring herbivores, insects or parasites with their bitter tastes.

Warning Smoking causes cancer and respiratory disease, whether you’re smoking from a bong or vaping

No votes so far! Be the first to rate this post.

We are sorry that this post was not useful for you!